Elizabeth Chayer opened American Dance Institute in Anchorage, Alaska in 1986 as an outreach program that taught dance in day care centers, preschools and community centers. She, and husband  moved to Seattle in 1989 and Elizabeth started American Dance Institute Seattle that same year. For three years she managed both locations before focusing all efforts on her fast-growing Seattle operation. 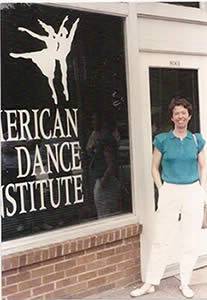 Elizabeth Chayer, founder of the American Dance Institute, on opening day of her first dance studio in Seattle's Greenwood neighborhood 1991.

The Phinney Ridge Community Center was her first class room studio and she quickly built enrollment to 60 students. Sensing a real need for her style and approach to teaching, she leased the corner space at 8001 Greenwood Avenue North.

This was a daring move at the time because most schools were located off the beaten path, in a less visible location that offered lower rent. Appreciating that location is everything in business, she took the plunge and leased the busy and visible corner space at the intersection of 80th & Greenwood. With the help of her mom and dad who flew in from New York, Steve and their long-time friends Kim Hartman and Maryl Marx, was remodeled into a state of the art dance studio.

In 1990, Elizabeth was approached by long time Greenwood dance school owner, Verla Flowers. Verla was the venerated owner of Verla Flowers Dance Arts. After a long and illustrious career, she was retiring and approached Elizabeth about buying her out. Thus, Elizabeth was able to purchase Verla's name list and further boost her new school's marketing efforts. One of Verla's early students of note was a young Mark Morris. Mr. Morris is, without question, one of the most brilliant contemporary dancers and choreographers in the world today.

School enrollment grew very quickly and steadily. Elizabeth was a very busy small business owner, mother, and wife. In 1993 her first son Andy was born and two years later, almost to the day, Denny arrived. In fact, in 1995, while pregnant with Denny, Elizabeth was auditioning a new teacher in studio one when she went into labor. She finished the audition, drove herself to Northwest Hospital and Denny arrived into the world just 20 minutes later.

In 2007, she leased a 2nd space in the same building and opened studio two. Today some 26 years, and 12,700 students later, ADI employs 17 dance instructors, an office staff, a huge student alumni, numerous community awards and deep roots into our community.

Over the last 25 years, ADI developed a reputation as one of Seattle's finest ballet schools. Their class offerings now include Contemporary, Jazz, Tap, Irish Step, Creative Dance, Flamenco, Break Dance Ballroom, Latin, Swing and more. Many of her former child students have enrolled their children in classes. "It's all come full circle, "she says. At an age when most small business owners think about retiring, Elizabeth won't hear of it. "My students and parents are my families, and I love my ADI family."

Elizabeth is leading her school through an ambitious makeover these days with new colors, new logo, website and more. Says Elizabeth; "I've built a warm, welcoming and accommodating school because in this environment anyone can learn. I want the world to know that dance is for everyone and I figure it will take another twenty-five years to get the word out." :)

Our very first class in Magnolia is a Pre-Ballet / Tap combo class with students Benjamin, Sophia and Serafina with dance instructor Darci Deaver.

Magnolia parents in the new observation room watching their children & grandchildren in class and and students awaiting their next class.

Elizabeth, today, with Seattle performers CucKy Charles on her left and Andy Chayer on her right at a recent Phinney Ridge Art Walk performance in studio 1.   A long time musician, she at the chance to add some holiday music to the school's normal dance performances line up.